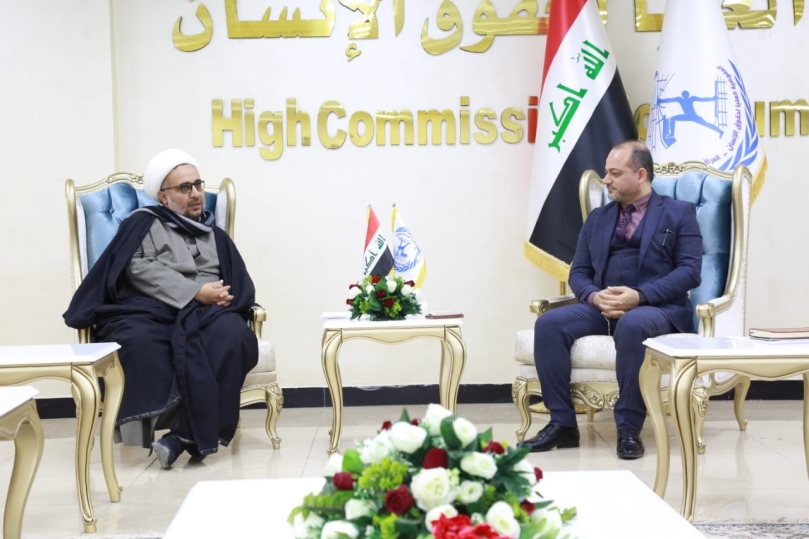 The member of the Iraqi High Commission for Human Rights, Dr. Ali Al-Bayati. Discussed with a delegation of Al-Alawiya Holy Shrine the documentation of terrorism crimes in Iraq at various stages.

At the beginning of the meeting, the delegation pointed out that the Shrine has a project to prepare a comprehensive Encyclopedia to document terrorism crimes since 2003, especially the stage of Daesh entrance and the declaration of Fatwa Al-Jihad , Indicating that the Shrine seeks to include statistics and data issued by the official institutions into Encyclopedia in order to ensure its credibility as a reliable source adopted by future generations.

In turn, Al-Bayati welcomed the initiative due to the importance of documentation in providing redress to the victims and informing the generations with the size of those violations to prevent recurrence in the future, confirming IHCHR readiness to provide the Encyclopedia with data, research and statistics as well as support it to be a reliable database.

During the meeting, Al-Bayati expressed his desire to expand the framework of cooperation between the Commission and the Shrine in the field of awareness and education in relation to negative phenomena in society such as drugs and begging, pointing to the importance of benefiting from the role of religious institutions and their impact in society in addressing these phenomena, which requires concerted efforts of all governmental institutions and NGOs.