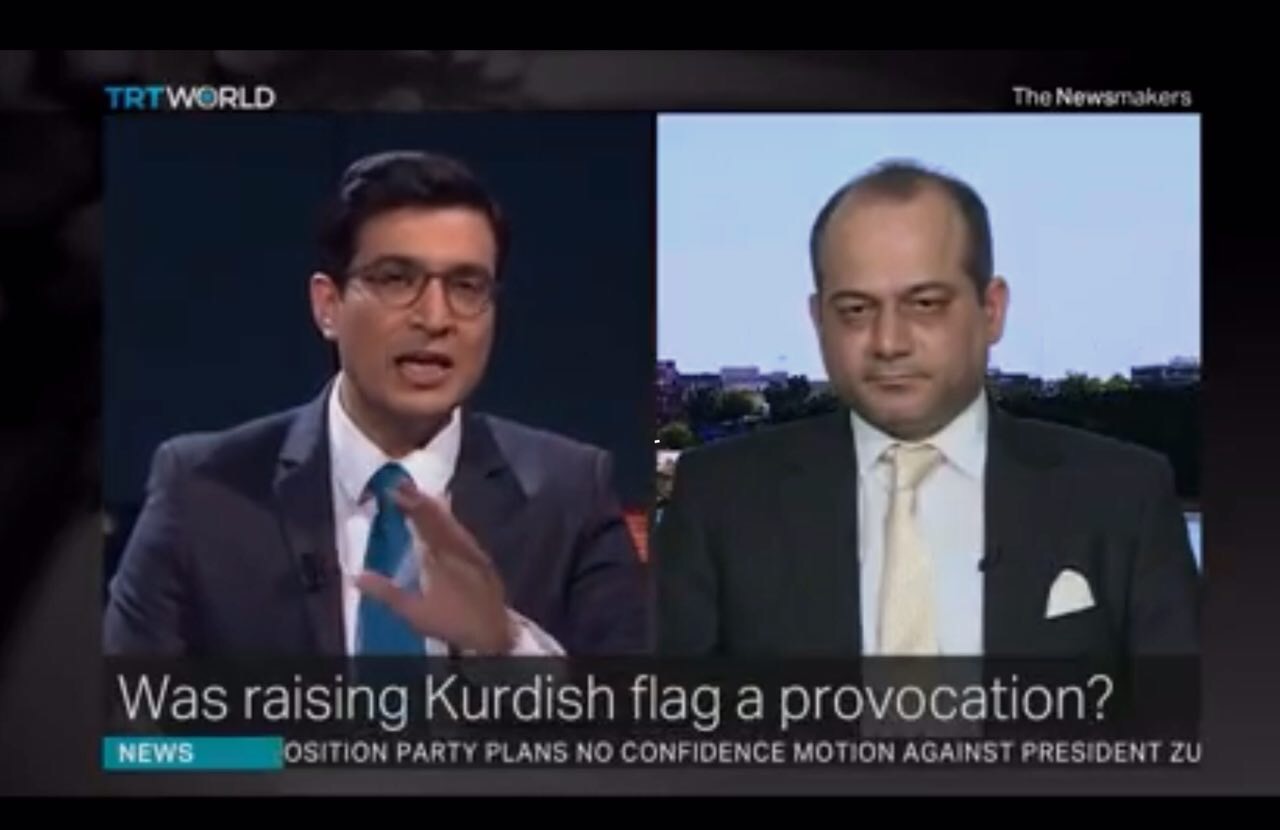 TRT world TV had an interview with Dr Ali Akram president of TRF yesterday to discuss about Kurdish flag raise in Kirkuk. The most important points discussed are:

– It is well known that the official mechanisms adopted to know the origin of any city and accredited by the United Nations to settle disputes between peoples about the origin of any city is the adoption of the ancient tombs of the city and the adoption of the names of the neighborhoods of the city. When we look at these points, we find obviously that the oldest graves in the city are in Turkmen neighborhoods including graves of ” Sultan Saqi in Tes’in, Musala and Turkalan graves and Imam Zainalabdeen grave in Tawook”. The names of the oldest neighborhoods and cities of Kirkuk are mainly at Turkmen side including ( Musalla, Qouria, Tes’in, Taza khurmatoo, Altoon Kobri and Tawooq), while the Kurdish areas are all modern areas most of which have been created or been expanded after 2003.

– There is a significant demographic change that took place after 2003, in terms of bringing about 600,000 Kurds from inside and outside Iraq to live in Kirkuk by giving them lands and money. In addition, they were and still encouraging any Kurdish pregnant woman from outside of Kirkuk to deliver their babies at hospitals of Kirkuk to obtain a statement of birth and thus the identity from the province of Kirkuk.

– There is an intra Kurdish tension that has increased in the recent period between the Kurdish parties and there is outcry by Kurdish people in KRG against political class because of the bad economic situation and corruption rampant by the political authority. There is as well a Kurdish Kurdish conflict in Kirkuk over its imports and its economy has also increased weeks ago because of bringing troops from Sulaimani belonging to PUK. All these things led the Kurds to take this step as a means to unify the Kurdish people and the Kurdish media towards a new enemy and prevent any more progress in the internal tension through irritating the Kurds emotionally toward new external event.

– The governor of Kirkuk Dr Necmettin is trying to introduce himself as a chief Kurdish leader after disappearing the role of Talabani. He has a new project of special region of Kirkuk in addition to the project of the Patriotic Union of Kurdistan party of a second Kurdish region including Kirkuk, Sulaimania, Tuzkhurmatoo and Kefri, to be under the control of PUK, as the old region ( KRG) is under the control of PDK, to be the nucleus of the Greater Kurdistan State.

– It should also be noted that the Kirkuk provincial Council is an un-elected council. It has been established by the coalition (invasion) authority and it is in violation of the law and the constitution for 14 years. The governor’s position is also illegal because it is the result of this illegal council. The United nation and Iraqi parliament requested and advised the work to normalize the situation and prepare for a new election years ago, but nothing was applied on the ground because the province is controlled by power of PUK and there is full weakness of the central government there.

– Kirkuk’s local authority failed to protect innocent people over 14 years, as there was continuous assaults against Turkmen and Arabs in the province by terrorism. As Turkmen we faced recently massacres at the village of Basheer and town of Taza Khurmatoo by Da’esh over the last 3 years. Hawija is still under control of Da’esh. The terrorist gangs controlled the central city of Kirkuk within few hours months ago, so where is the role of the local authority and Peshmerga in protecting citizens of Kirkuk.

– Turkmen youth have weapons and public military groups( part of PMF) in the city of Tuz Khurmatoo ( 80 km south of Kirkuk) and they have defended bravely themselves in the worst two attacks of the Kurdish militias against Turkmen in Tuz. The same thing will happen in Kirkuk if this constant pressure by Kurds not removed , as it will generate a spark and reaction lead Turkmen to be armed to defend themselves in Kirkuk. Today there is a public outcry by Turkmen and the Kurdish parties should not think that their control of the local administration by power will be a patron for them or a guarantee for stability.

– It is now necessary to have a real efforts by the United Nations to intervene strongly in Kirkuk to organize partnership between the parties and partners in the administration and agree on a reasonable and constitutional formula for the future, otherwise the situation will explode at any time and it will have security and political implications might affect all Iraq and even its region.